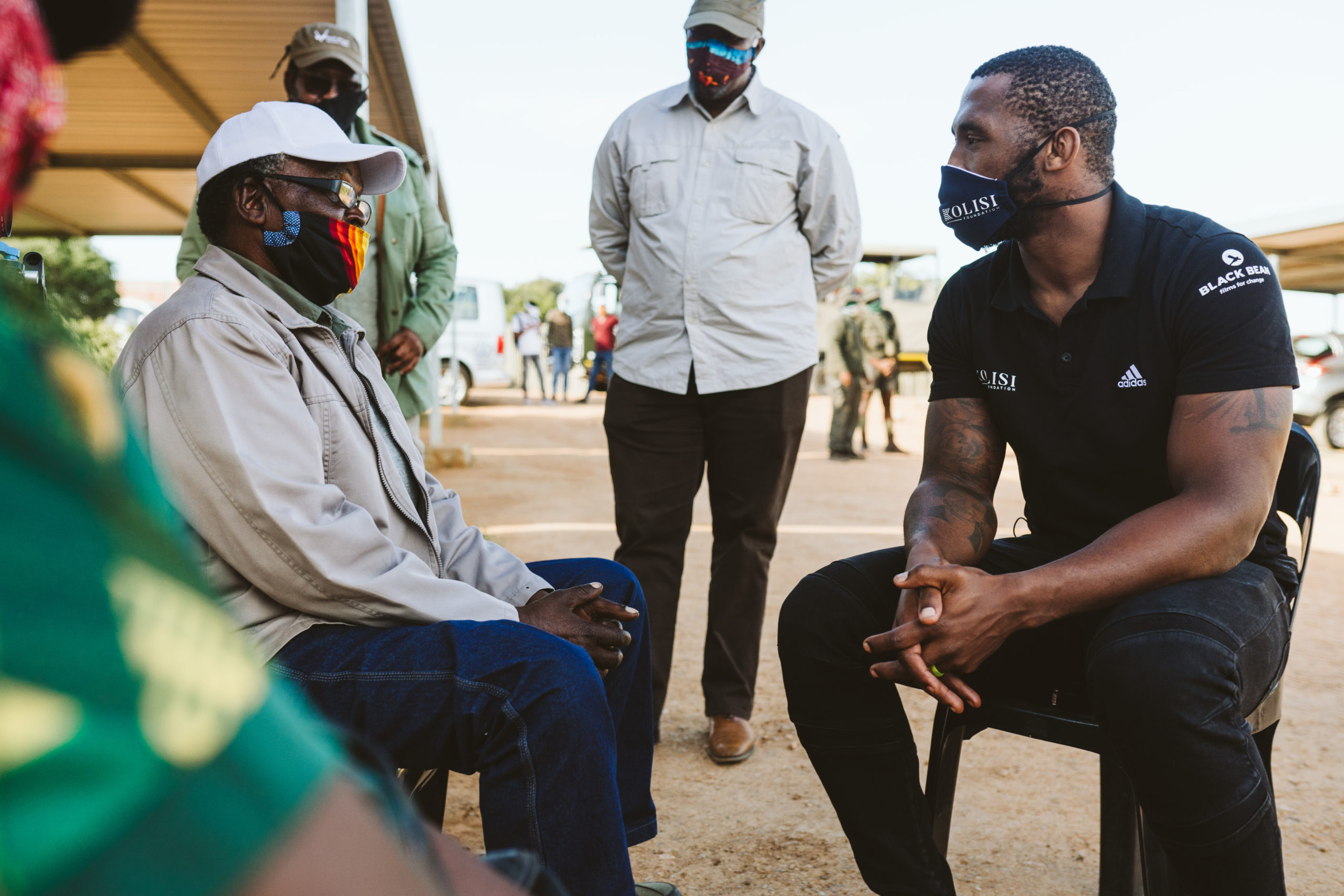 “You can cut the branch of a tree by incarcerating someone but you really need to get to the root of the tree to de-root it…We’re tugging at the roots and trying to pull them out.” –  Joel Smith (The Kolisi Foundation, Consultant)

We began Women’s Month committing to a series of conversations between men, around the joint issues of gender-based violence and toxic masculinity. Gender-based violence is often framed as a “women’s problem”. It impacts on almost every aspect of women’s lives and disproportionately affects women and girls.

But gender-based violence is fundamentally a problem about men. It is rooted in the way men are socialized to be hard and tough, in the way men are taught to expect obedience and to exert control, in the way boys are expected to act, in the limited range of emotional responses men are given to deal with anger, frustration and disappointment. Mbuyiselo Botha speaks directly to the idea of gender-based violence as a problem about men: “We will not win the fight against violence against women until and unless we focus on men. Because women don’t rape themselves. Women don’t violate themselves. Women don’t sexually harass themselves.”

Through our August Men in Conversation series, we had the privilege of meeting and talking with a broad range of men including: Mbuyiselo Botha, Commissioner of Gender Equality; Joel Smith, The Kolisi Foundation Consultant; and Prof Kopano Ratele, academic, activist and author. We also met and spoke with Luyola and Siyabonga, two young men who founded a grassroots organization to educate and inspire young boys to be protectors, not perpetrators. Through Langa For Men, Luyola and Siyabonga help boys take responsibility for preventing violence against women. They understand that “gender-based violence starts and ends with men”.

Unfortunately, gender-based violence is often spoken of  as a problem of ‘other men’ – violent men, sexual deviants, or ‘broken men’. Many of our interventions are aimed at identifying and targeting “problem men” who are at higher risk of perpetuating violence against women. Or, we focus on harsher prison sentences and punitive measures to punish men once they have already committed acts of violence against women.

We cut off the branches of the tree but we don’t pull out the roots. The Men in Conversation Instagram live talks we held during August were our small attempt to start pulling out the roots of gender-based violence. We moved from talking about other men, to talking about ourselves. If “gender-based violence starts and ends with men” then that means it starts and ends with us.

We are committed to an ongoing discussion around our complicity in perpetuating violence against women. We commit to taking responsibility for preventing violence against women. That means being honest and vulnerable about when we have held sexist views toward women, when we have exerted power over women, when we have sexually harassed or made women feel unsafe and uncomfortable. With a wisdom that belies their age, the founders of Langa For Men tell us “We are all the victims of untold stories. Changing starts us to heal because we also have wounds. By being part of healing others, we help heal ourselves. We need to battle the demons in ourselves and unlearn the toxic waste.”

Ending violence against women also means speaking out any time we see women treated in a way that undermines their worth, dignity and humanity. This means speaking up in our families, in our sports clubs, with our friends and with our colleagues. It means shutting down sexist jokes, and calling men out when they harass women. Mbuyiselo Botha reminds us, “When we keep quiet, when we look the other way, we are complicit. We are condoning. We are conniving when in fact we do not visibly and practically speak out and call each other out…Men have got a critical role to play and that critical role is calling each other out.”

Calling other men out is not easy; but what is at stake for women when we don’t is far greater. Men may risk losing friendships or prestige or status. Women stand to lose far more, including their lives. Our co-founder, Siya Kolisi, reflects honestly on the need to speak up boldly in public and private spaces: “I know in the past there were situations where I could have said no. Cos I thought, you know, if I’m not doing the violence then its okay, I don’t need to address it. Now I’m realizing that that’s not right. If you don’t say anything, you condone it…If somebody’s doing something to somebody else I need to say something or else I’m supporting it.”

Gender-based violence is a problem of men. The responsibility for ending violence against women lies with men. Over the next several months we will be continuing our Men in Conversation series, because “[August] should be a time for us to reflect on what we have done during the whole year to make life better for people in South Africa. To listen and to educate ourselves, to come up with solutions…All the work that we do in this month should be happening every single month because Gender-Based Violence doesn’t only happen in a certain month. It’s an every-day fight.” [Siya Kolisi] 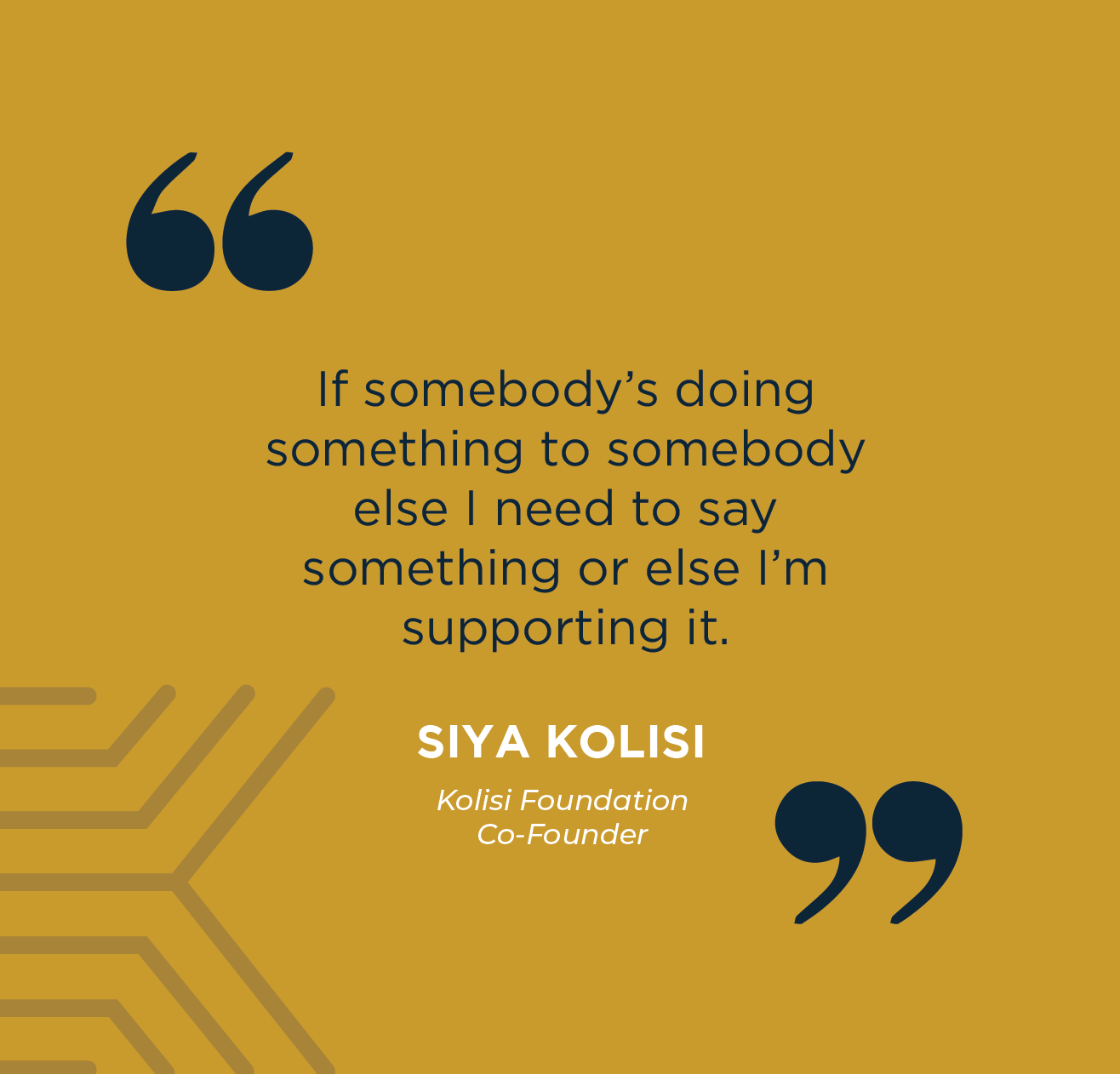